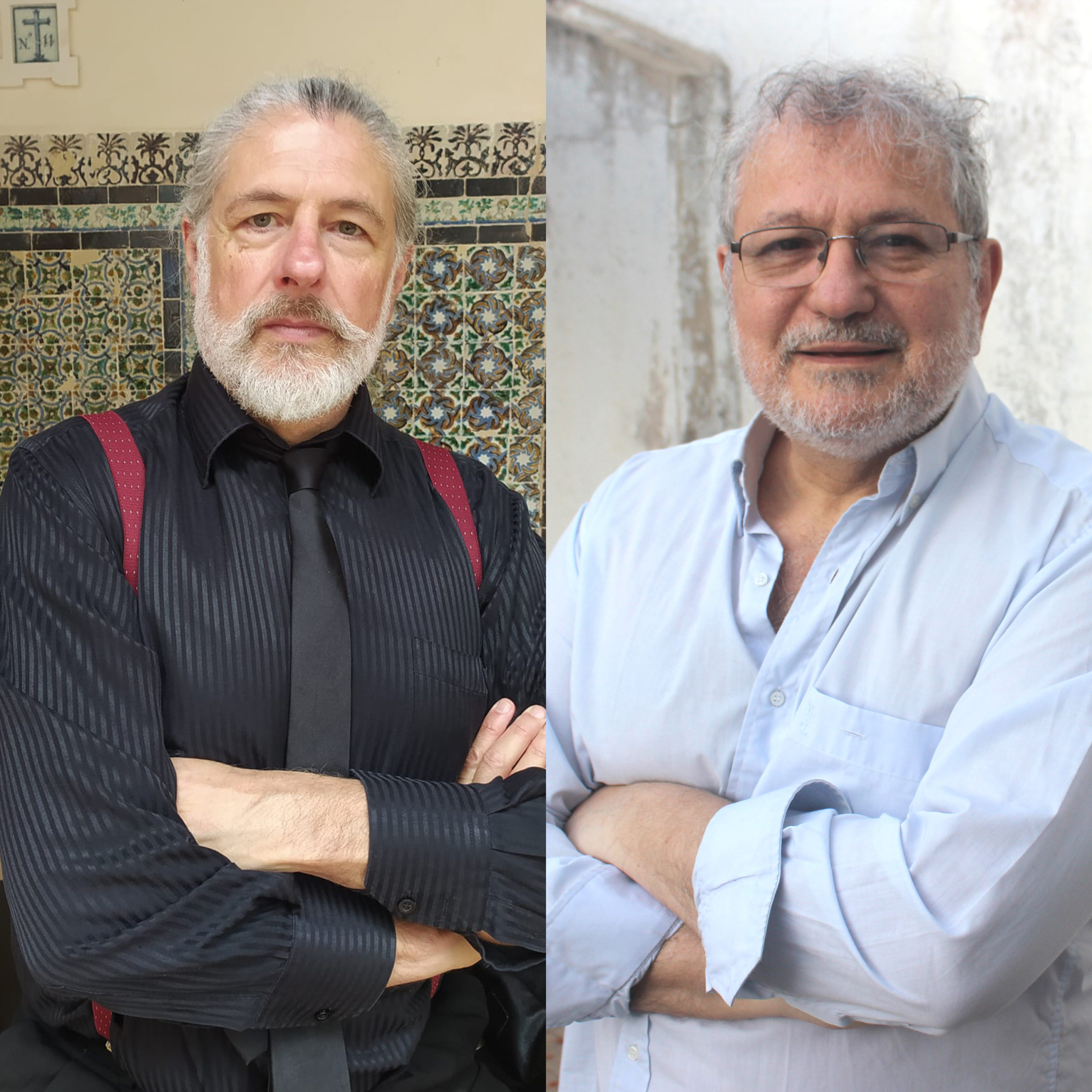 The new album on Elektramusic is the result of a collaboration between two artists already present on our label: Diego Montes and Gonzalo Biffarella. In this interview, they present their collaboration and explain the message of their album: “Voces con memorias”

The album “Voces con memorias” is a collaborative work between Diego Montes and Gonzalo Biffarella. Is it the first time you work together? What was the process of working together?

Gonzalo: We met Diego at the end of the 70’s. We were at the beginning of our experiences as young musicians. Ancient music was one of our points in common, we both went through the Ancient Instruments Ensemble of the Goethe Institute of Córdoba, Argentina. Later, we got to give some concerts in duet, me on guitar and Diego on recorders and clarinet.

The roads took us to distant points, but in 2000, we found ourselves in Cologne, Germany. Since then we have resumed a dialogue that included the shared “good humor” as a fundamental tool.

Then I invited Diego to be part of the project “Dialogues” in which we had to create a piece in a collaborative way.

The project “Voces con Memorias” begins with an invitation from Diego to work on some works based on a poetry by the Argentine writer Oliverio Girondo. From there an intense work was unleashed that resulted in this CD, which we call “Voces con Memorias

You are used to doing projects without text, what is the difference with a purely instrumental work? What are the advantages and disadvantages of both ways of working?

Both: Our first joint experiences were in the field of chamber music. Then in “Dialogues”, we did a work Clarinet and Chapman Stick (1).

Then we worked on a work called “Diego y los espejos”, for Clarinet and electroacoustics, a work edited by Elektramusic (2).

Finally, we face the project of working on a series of works based on poetry. The word as a sound and meaning-bearing gesture could only enrich the creative experience.

The first track of the album is particular. Can you tell us more about it? Why is it free? How did you work with the different interpreters of the different languages of the texts?

Both: “Memories of the procedure”, which is the piece that opens the CD, was actually the last to be composed in this series. This work arises after reading the book “Procedure” by the Argentine writer Susana Romano Sued. A text that narrates something of the horror, which the same author shared in the concentration camps, along with many others, during the military dictatorship, in Argentina from 1976 to 1983. The language and style of the text does not give a minimum pause, not the slightest concession.

Gonzalo: I made a first version in Spanish and a short time later, encouraged by Susana herself and by Diego Montes, we decided to undertake a multilingual version, taking advantage of the languages ​​into which the text that was originally written in Spanish had been translated. Those translations provided us with French, German and English versions.

Both: Here, the search for those people who could commit to reading in each of the languages ​​that would dialogue in the piece was decisive. Each of them contributed their personal interpretation to the texts, gestures that enriched the creative process. The four narrators are:

Building this multilingual and polyrhythmic “motet”, which seeks its roots many centuries before our time, in which voices intersect with the sound planes of Diego’s clarinets, environmental sounds and the possibilities of my ChapmanStick, immersed me in a world in which sounds expressed their semantic, material and expressive potential, making it coexist with the referential and the abstract. I spent whole days, many days, working immersed in this world of sound. The sounds came and went through the networks, from Argentina, Germany, France, the USA and Spain. Sometimes I had to stop and let my head and body regain strength to move forward with the task …

The decision to leave this track with free access is a tribute to the memory of thousands of people who suffered unjust detention, torture and death during the last military dictatorship in Argentina.

How did you choose the texts of the other titles of the album? How did you articulate the text and instrumental part?

Both: “Voces con Memorias” is completed with three poems by Christian Morgenstern: Das Knie – Das Nasobem – Die Trichter, one by Oliverio Girondo: Tropos, all of them translated by Diego Montes himself and one more poem by Susana Romano Sued: Diario de la Casa.

Both the lines of the texts in different languages, the instrumental lines and the parts made with environmental sounds and / or electroacoustic processes, are treated with a syncretic thought. That is, seeking to combine the diverse and even the opposite in the same texture and articulating each section with sound gestures arising from the hybridization of those sounds.

What is your relationship with Anahí Montes who is the narrator in German on the first track, and the narrator on the following tracks?

Both: Anahí Montes, is a fundamental part of this Project. She has an exceptional technical and expressive handling of her voice. Anahí, from Germany, experimented and recorded several versions of each text, in German and Spanish, getting to improvise sung sections. On several occasions these different versions are superimposed in polyphonic textures in several of the pieces.

We really feel that these works are the result of a collective work. Each artist has contributed a lot of themselves, so that the result would not be the same without the commitment of each one.