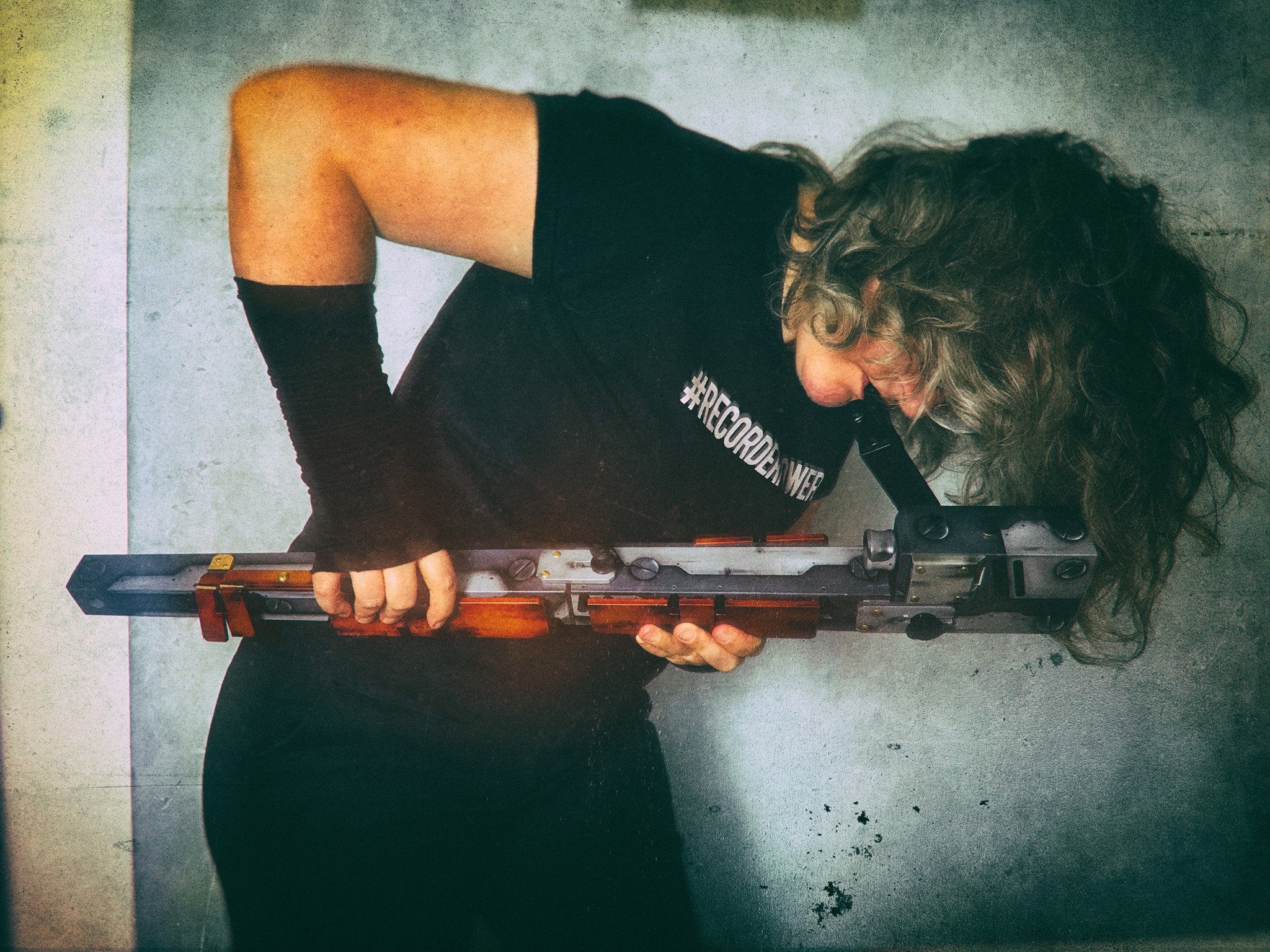 Who are our artists’ label? How did they discover contemporary music and do they have mentors? Let’s learn more from them! It’s Sylvia Hinz’ turn.
(Discover Windserie here!)

Berlin, Germany. I grew up in the countryside in Lower Saxony, which strongly shaped my ideas of sound regarding natural forces of wind and water. After moving to Berlin, those sounds were mixed with urban strains and industrial components.

Do you remind you how your beginnings in music were?

Typical for classical trained musicians, I started playing my instrument (recorder) as a child. The first teacher and lessons were enough to raise my curiosity, and in the second year, with a different teacher, I started to merge with the instrument. I was also exposed to different categories of music, for example Jazz, jewish folk songs, Irish tunes, and improvisation, due to the fact that there were teachers from different nationalities around presenting their sounds. Being exposed to this variety of music broadened my mind and let me move through the centuries sound-wise, from medieval to modern times.

My first concert took place in the Netherlands, and I think I was around 14 years old by then. I performed with a Youth Orchestra and a quite fierce solo. In this context, contemporary music was not very experimental, but the most impressive recollection was “The Unanswered Question” by Charles Ives. The rehearsals and performances raised many discussions amongst the musicians, their teachers, and the audience, but equally appreciation and admiration. This occasion was also my first encounter with the idea of some musicians / teachers “that contemporary music destroys both the instruments and the tone, let alone the technique”. For myself, I can happily state that no instrument was ever destroyed, and that the work on microtonality, extended techniques and polyrhythms helped me a lot in every aspect of my musicianship.

After finishing my studies in Berlin, I also turned towards improvisation, sound research, and interdisciplinary collaborations with artists in general. I am on various albums and compilations, performing the music from different composers or improvising with others. My album “windserie” is my first solo work, which will soon get a second part.

Can you tell us when and how you discovered contemporary music and started to play it?

First I had contact with contemporary music while taking part in a contest in Germany called “Jugend musiziert”, while listening to other contestants. In that time, playing music from three different musical periods was mandatory, one of the periods had to be contemporary. I played mostly music from the 1960s in that category, nothing modern or experimental. None of my music or instrumental teachers up to my studies in Berlin really liked or supported contemporary music, so I had to do the research on my own – mostly through reading scores or listening to recordings at music libraries (pre-internet & savings compulsion times). Sometimes there were even documentaries about contemporary composers on the TV – almost all male, though. During my last two years at school, I had an excellent teacher who fostered curiosity in all directions and discussions on topics like microtonality or experimental sounds.

When I started my academic studies, I met Dieter Schnebel and took courses on experimental music with him. Most of the other professors didn’t like contemporary music and praised Bach and Beethoven, but luckily my recorder professor Gerd Lünenbürger did like it, so I was able to work on many pieces with him. I found some like-minded colleagues and met young composers during that time, played chamber music, created collective concepts for improvisations, but the most valid experiences happened outside of the academic context. The restrictions to certain, again predominantly male, composers and the personal taste of the professors were quite limiting and discussions on this topic not welcome.

I am very happy to see that this changed and is still changing, and the possibilities to study contemporary music on an academic level improved very much over time. Still, the attitude of many professors towards their students remains quite stiff, and they don’t see their students as musicians but rather want to create clones of themselves.

Have you musical mentor?

Besides the two mentioned above, there is definitely Pauline Oliveros, also Mathias Spahlinger and Violeta Dinescu, as well as almost every person I choose to collaborate with. It is very important for me to perform music which is related to the time I live in, rather than repeat something which has been played lots of times before. On the other hand, I research music written by women composers from the renaissance and sometimes put them in a contemporary setting, for example antiphons by Hildegard von Bingen as a mash-up chamber work. Besides that, I am also very interested in music written recently for early instruments in ancient tunings.

What are your projects to come?

There is quite a lot under way:

1. I am planning to do a concert film with very diverse pieces by incredible composers like Michele Abondano from Colombia, Marc Yeats from the UK, and Jeanne Strieder from Germany.

2. I am collaborating with Tiange Zhou on a Performance-Installation on the topic “individual & city” and our lives as women artists in this context, and with Shruthi Vishwanath on works on our womanhood and the very different significance of this in both our countries, India and Germany.

3. I am working on a new solo album, an EP with my industrial project Catenation, and a new album with my dissonant death metal band Coma Cluster Void.

4. I am working with different artists on interdisciplinary projects, including video art, sound art, visual art, performance, and more.

5. I am collaborating with composers from around the world on new pieces, with and without electronics or tape, with or without projection.

6. I am working on #ArtAsActivism, fostering the work by womxn artists, collaborating interdisciplinary, using my privileged situation to support and help others.

7. I am planning new concert series in different formats, holding contact with all the festivals I couldn’t visit this year, researching in musical areas I haven’t been yet.

According to you, how important is the power of the Internet and social media for your art? Do you often use it?

For my art in itself it is not important. But for connecting with other like-minded artists, finding out about concerts / recordings / artists, and displaying my work, it is very important. How else would it be possible to reach as many people all over the world? Yes, I am using social media often – for research, connecting and staying in touch with people, learn and find out about performance possibilities like festivals or concert series, find new partners for collaborations, …

I am also working on the topic #ArtAsActivism, raising awareness regarding womxn artists in general and spreading the word about their work. There is a lot to do in that direction, and connecting with other womxn to be able to build a fitting network for us is one of the key aspects.

What impact on your work had and continues to have the coronavirus crisis?

When everything shut down in the middle of March, I was in the UK, performing a gorgeous concert with Catenation. In a short period of time, absolutely everything was cancelled – concert trips which had been prepared for years, concerts in Germany and abroad, in-person teaching, everything. After returning to Berlin, I was at least able to relocate the teaching to online lessons, but the events continued to get cancelled.

So far, only one concert in September in Switzerland happened, four more events are up in November – hopefully!

Besides the economic concerns, I was simply not able to play music for about a month. I felt paralysed and numb, and was working hard on keeping everything needed up and running. After a while, music came back into my mind and I started playing, recording, and practising again.

Everything considered, I am now ok in this crisis, and supporting others who are not as privileged and lucky as I am. We need to stand together as people of the world!