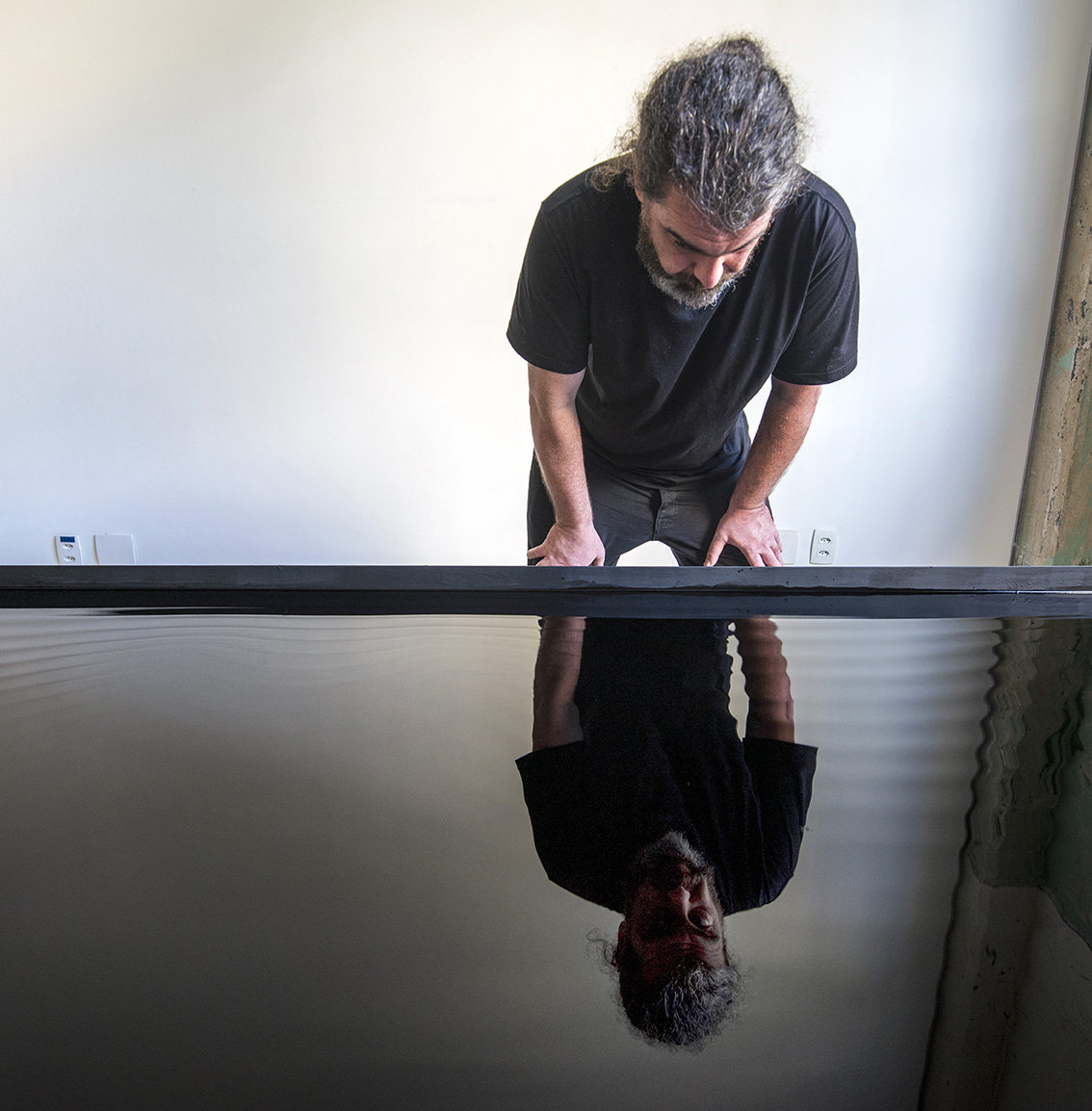 From architecture to electroacoustic aesthetics and dancer bodies, Luca Forcucci is a multiple artist who explores artistic areas without limits…

In « Bodyscape », you recorded movements of a dancer body via biosensors and microphones. How did you get this idea? Was it difficult to develop and how reacted the dancer to it?

During the past decade, I worked on many aspects of the relationship of the body, the sonic and their resonance with the architectural space. The starting point was a sensation of mine perceiving a body moving/dancing as a mental image according to the music I would listen to. Then, with my doctoral research, I explored visual mental imagery triggered by the sonic arts. The theoretical part included collaborations with neuroscience labs. The outcomes of the research informed the piece Bodyscape. It was not a difficult project per se, but the time spent to reach the result was important, between the first idea and the final mix, around 10 years passed. The performance was a collaboration with the dancer, Crystal Sepúlveda, and Cheryl E. Leonard. who brought their sensibility to it. Crystal brought her own ideas and choreography. She is a wonderful dancer and I am grateful she was part of this project. Cheryl is a fantastic musician, who builds her own beautiful instruments, and I am honoured she delighted us with her sonority. The collaboration fulfilled in many ways the true sense of the word.

Can you talk about the field recording collected at the border of Botswana and South Africa? How did it go?

The field recordings were done during fourteen days and nights in an intensive manner at the border of Botswana in the Limpopo region of South Africa. What was supposed to be fourteen days became then almost two months of research through several unexpected events. The first iteration of the performance took place in San Francisco at the Lab Gallery. The second one at the Centre Dürrenmatt in Switzerland, was a commission. I chose the text L’Épidémie Virale en Afrique du Sud of the Swiss author Dürrenmatt. The two months journey in South Africa was informed by the text, a text about a virus transforming white people into black ones, a text about privileges. I travelled and observed the situation after twenty years of the end of the Apartheid.

Do you considered your work as « sound scape » or would you give it another name to describe it?

Soundscapes inform my work and provide the timbres I am looking for. However, the work is far more complex and depends on the people I collaborate with, being musicians, poets, dancers, scientists, etc. I don’t have a proper classification other than electroacoustic aesthetics perhaps.

Does your background in architecture inspires your music and how?

I am not sure how, but it is definitely a part of me. I am interested in architectural spaces and how they sound,but also how they are organised. My quest is to build a sonic architecture blending the sonic, the architecture and the perception of the beholder, in a way that the borders of each discipline are blurred.

What are your next projects?

Most of my projects are related to travels, and they are on hold at the moment due to the pandemic. So, I am writing a lot at the moment. I have a chapter in a book coming out next year relating to internal sonic perception, which somehow resumes all of the above. A paper will be out in December for the 30th edition of the Leonardo Music Journal about a research in the Amazon Rainforest I did in 2008. An exhibition is still ongoing at the Club 44 in La Chaux-de-Fonds, Switzerland, which is a fifteen meters long project with photographs and qr codes from Brazil, the Amazon Rainforest, Norway and with cut-up texts from the Swiss authors Blaise Cendrars and Friedrich Dürrenmatt. The opening was part of a project of mine named Laser Nomad exploring art and science, where I invited several people for a debate, and we ended with a concert between Mahadev Comet (aka Al Comet former member of the Young Gods).
I am preparing a performance for a Museum in the Italian part of Switzerland for Spring 2021. Right now I am making field recordings in Liguria in Italy, as part of a residency. Finally, I will take part in a collective exhibition at the Museo Nacional Centro de Arte Reina Sofía in Madrid named Audiosphere and curated by Francisco López, which starts mid october. More news and projects at www.lucaforcucci.com and www.ubqtlab.org.