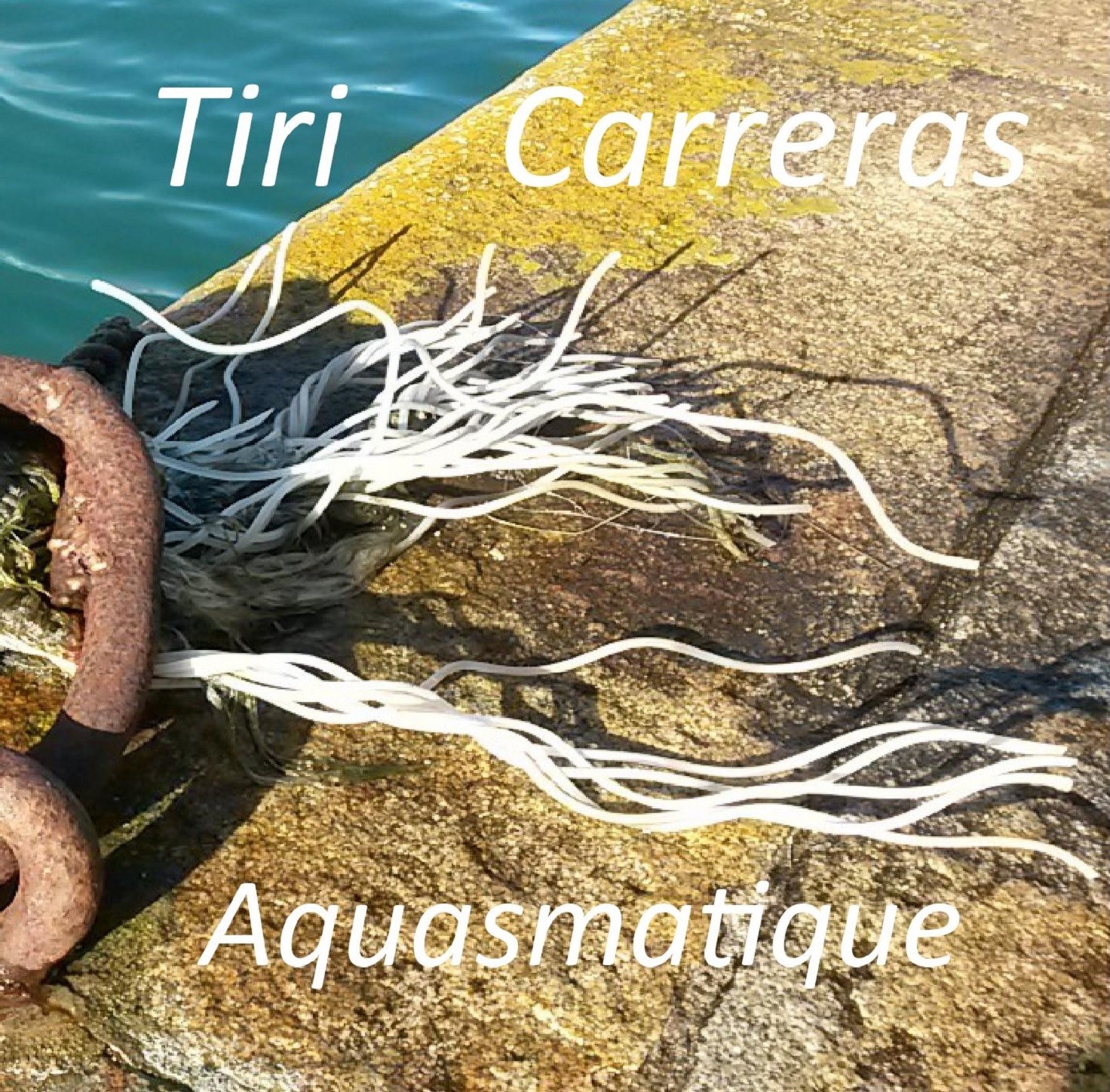 Read more about this album with the review in Musicologie (in French).

Recorded in May 2022 in his studio Villa Palma, Tiri Carreras uses a reduced kit with the horizontal bass drum, cymbals and many objects. Here, the bass drum is used more as a resonance box because it allows to amplify the produced sounds and is also used by rubbing the skin to produce continuous sounds impossible to obtain by the percussion. Some tracks, in particular Balaena and Melanocetus, are inspired by the aquatic environment, reminding us of cetacean cries or underwater sound recordings. The cover of the album also invites to cut the cord and dive solo into the aquatic environment with ears wide open…

The Melanocetus is a deep water fish that can be found in the oceans at depths of up to 2000 meters. Its large mouth filled with long thin teeth is frightening.
The 16″ thin crash cymbal rubbed on the bass drum head and with a double bass bow gives deep bass and also powerful highs. The shocks against the rim and the bounces on the skin give a chaotic and scary atmosphere.

Lophelia is a reef-forming coral evoking the mineral aspect of the piece.
Pebbles from the Godelins’ beach rubbed on the bass drum head as well as marbles rolling along the rim fill the sound space and an old alarm clock brings punctuation with its ringing. This short piece offers an interlude between two more substantial pieces and takes us out of the nightmare of the encounter with Melanocetus.

Pycnodus is an extinct genus of ray-finned fish.
The Tibetan bowl rubbed by the bow or struck by the mallet as well as metal bowls and small pebbles on the bass drum give a rather percussive atmosphere. Small plastic suction cups are also used to slap the skin, giving the impression of a fireworks finale. The brooms end this piece with a tribal rhythmic bringing us back to the original times when the Pycnodus participated in the planetary biodiversity.

Torpedo are cartilaginous fish living near the ground that have the ability to produce electricity as a means of defense or predation. The double bass bow rubbed on the studded ride cymbal produces a strident sound that is in sympathy with the studio piano.

Xenacanthus is an extinct genus of sharks. The double bass bow rubbed on the extruded polystyrene box and the guitar string produces a real dialogue between the different sounds.

Fish of the genus Amphiprion are commonly called “clownfish”. The Chinese chopstick rubbed on a screw of the hoop and the vibrations of the electric toothbrush brings a certain tension. The rhythmic melody played with chimes and rattlesnakes brings a lighter and funnier punctuation.

Underwater audio recorders have established that bowhead whales emit up to 184 acoustically distinct songs under the ice of the Arctic Ocean. Brushes and plastic or metal combs rubbed on the skin give sounds comparable to those produced by cetaceans. 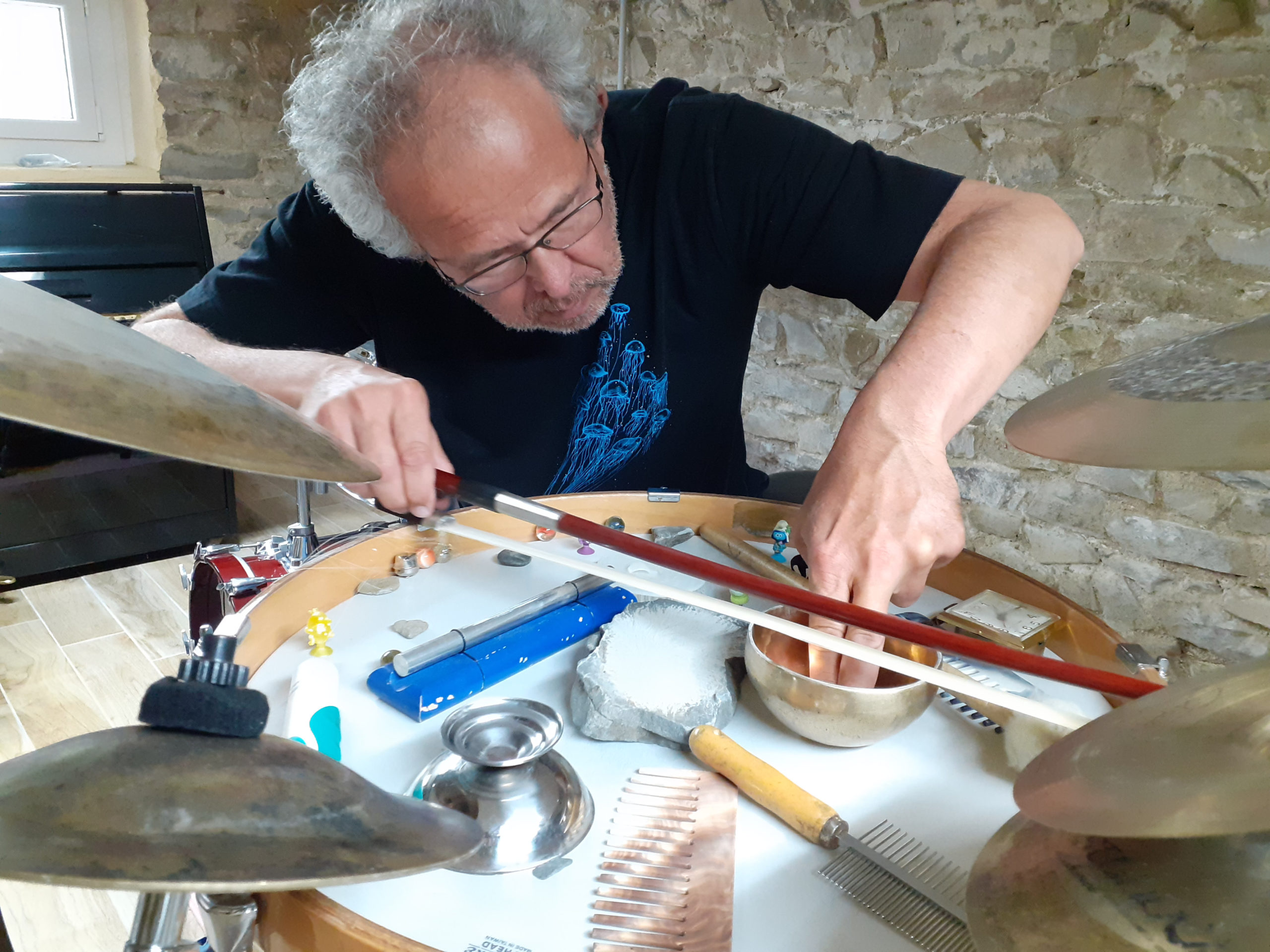 Drummer and improviser, Tiri Carreras started practicing the instrument as a teenager, playing immediately in a band. After a rocky start, Tiri turned to jazz and then to free improvisation.

In 2007, he met DoM Dubois Taine during a sound jam organized by Benjamin Duboc at the Fabricason in Malakoff. The taste of the improvisation and the pleasure to experiment the sound as well as the refusal of any chapel joined them.

They quickly found themselves working on free improvisation as a piano/drums duo (bBlunk) and released a first album entitled O’bcal on the Swiss label insubordinations in 2009.

In 2010, the duo (zBlug) released a second album entitled 68 on the Surrism Phonoethics label (Free Music Archive). The music is still totally improvised but DoM uses a keyboard with knobs and potentiometers, driving a palette of FM synthesis sounds of his own making via the Max MSP interface. While continuing to work as a duo, other musicians come to enrich the collective by creating new formulas. In particular, bBrrAx with Sylvain Guérineau on tenor sax in a rather free jazz register which released the album freeture in 2009. Also, zVeep, with Vee Reduron on guitar who released three albums: postbrbq in 2010 and pLucS in 2011 (with Jean Luc Petit on baritone sax) both on the Petit Label as well as Live at Kobe in 2013 on Free Music Archive.

More recently, the duo zBlug released the album Lichens on Elektramusic in 2021.

Due to the COVID 19 pandemic, the solo practice was imposed. The constraint of the confinement was the occasion to work on new ways of playing by experimenting with a reduced kit with a simple horizontal bass drum, cymbals and many objects. All the research work done for the past fifteen years within the XoNdZf collective deserved to be recorded in solo. It is done with the album élan vital released in 2021 on the Petit Label.

The album live à la guillotine released in March 2022 reproduces the sound recording of a concert given on March 6 in Montreuil.

The album Aquasmatique is an extension of this solo work.